Lower Limb (Leg) Deformities and Effects in Our Lives

From an orthopedic point of view, the deformity is the change of normal alignment due to the deterioration of the anatomical shape of the bones in the limb, leg, and spine skeleton of the human body. In other words, the curvature or malformation that occurs in the bones is called deformities. For instance, deformities called 'Bowlegs' (genu varum) and 'Knock knees’ (genu valgum), which are often seen in the knee areas of people, are the most common leg deformities. 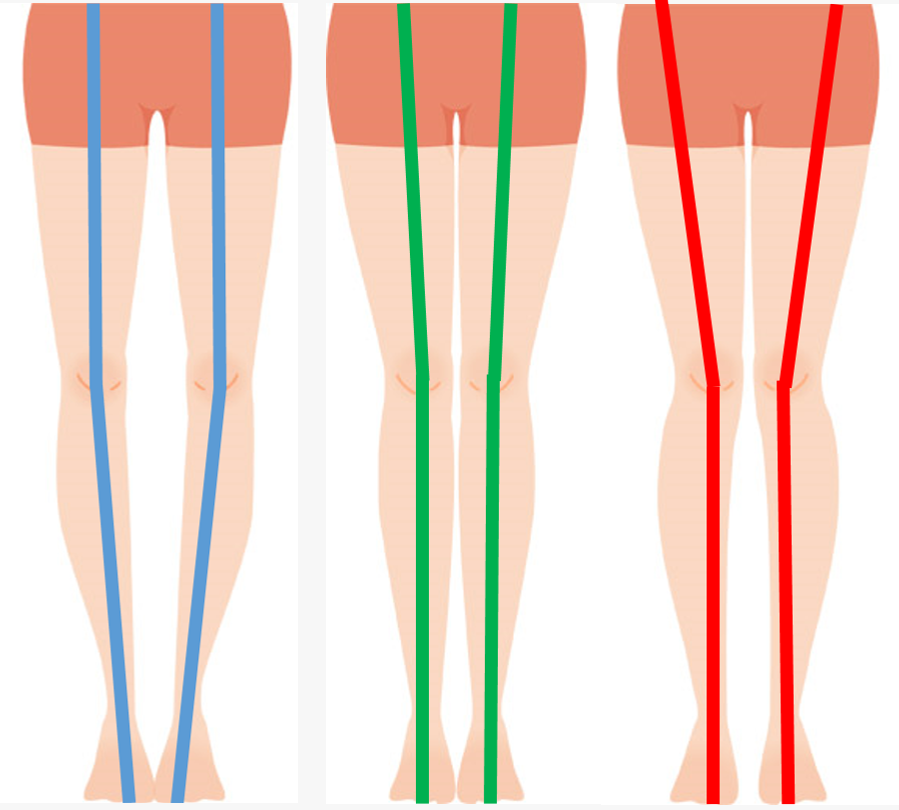 Deformities are often caused by genetic factors. If not treated in time, it can lead to calcification in the feet and knees as time goes by, and even condemn the patient to knee prosthetics. Genu valgum is a condition in which the knees bend inward and "knock" against one other. If the problem exists on both legs, it is defined as ‘X’. On the other side, it is called ‘K’ leg if it is seen on one leg. This situation is more seen in women rather than men. It is normal to be seen in childhood, but it is a problem if it continues during puberty. Unlike the genu valgum, the knees are turned outwards in genu varum. As it appears to bow or bend outward, it is called ‘bowlegs’ or tibia vara. It's mostly seen in children under five. The developmental bow legs ( physiological genu varum ), especially seen in babies, improve when they start walking. However, if it does not recover and continues in adulthood, it must be treated. If not treated, it may cause meniscus tears at a young age, erosion in the joint cartilage, and as a result, calcification spreads across all knees.

How do these deformities affect our lives? In general, deformities reduce our quality of life as they can cause problems such as arm and leg curves, height shortness, limb discrepancy, limited range of motion, and so on. In the future, it may disrupt the biomechanics of the body since it may cause other deformities in other areas other than the problem area. Especially in women, problems such as not being able to wear dresses, skirts, and swimsuits in summer arise because they disrupt the aesthetic appearance. Therefore, people's psychology can be affected in a negative way and it can take away the freedom to wear the clothes they want and cause them to feel bad.

Now, before we move on to the treatment methods, let’s take a look at the causes of limb (leg) deformities:

Although the bone angle in the knee joint is more than normal, it is often genetic and can also occur due to various diseases. These are as below; 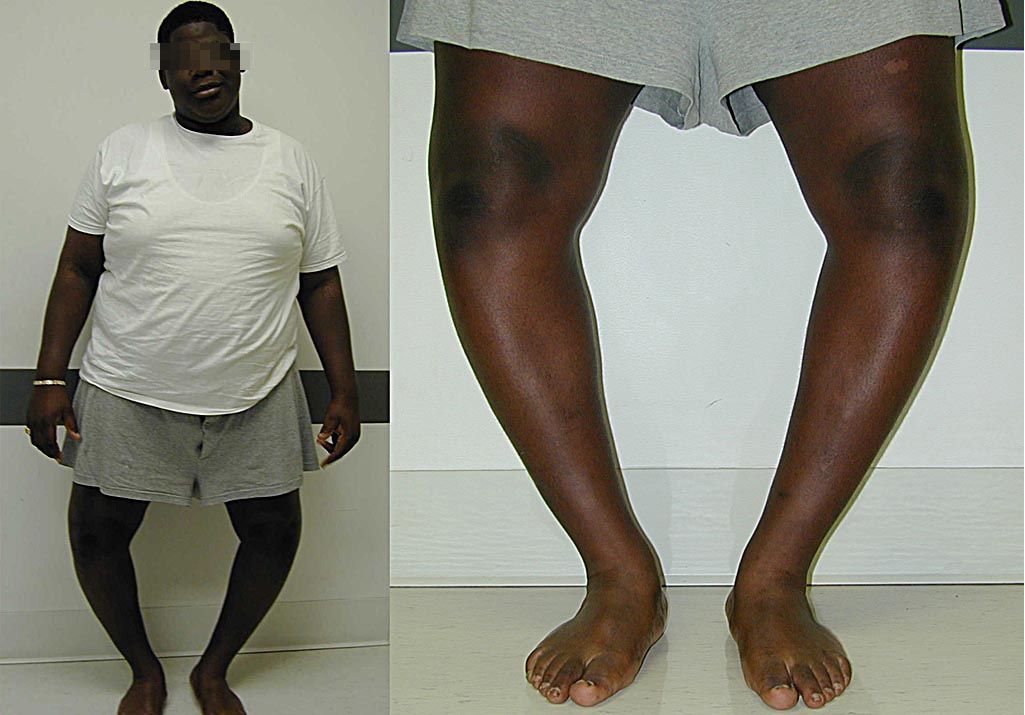 Blount Disease
They are progressive curvatures in the lower legs caused by premature closure of the growth plates on the shin bone and cessation of growth. It is also called ‘Tibia vara’. There are two types of Blount disease:

This type of deformity is more likely to be seen in children who often walk early. Children with obesity and vitamin D deficiency are also in a high-risk group. The disease is seen in boys rather than girls more commonly. Untreated Blount disease can cause advanced leg curvature, which may lead to a problem in the development of children and make them suffer as they walk. In cases where it progresses further, it is known to cause joint diseases.

Rickets
Rickets is the softening of bones that are weakened by long-term vitamin D deficiency as well as the lack of calcium can also lead to rasitizm. This problem is seen in children causing the anatomical posturing of the legs to deteriorate, which may result in the genu varum. 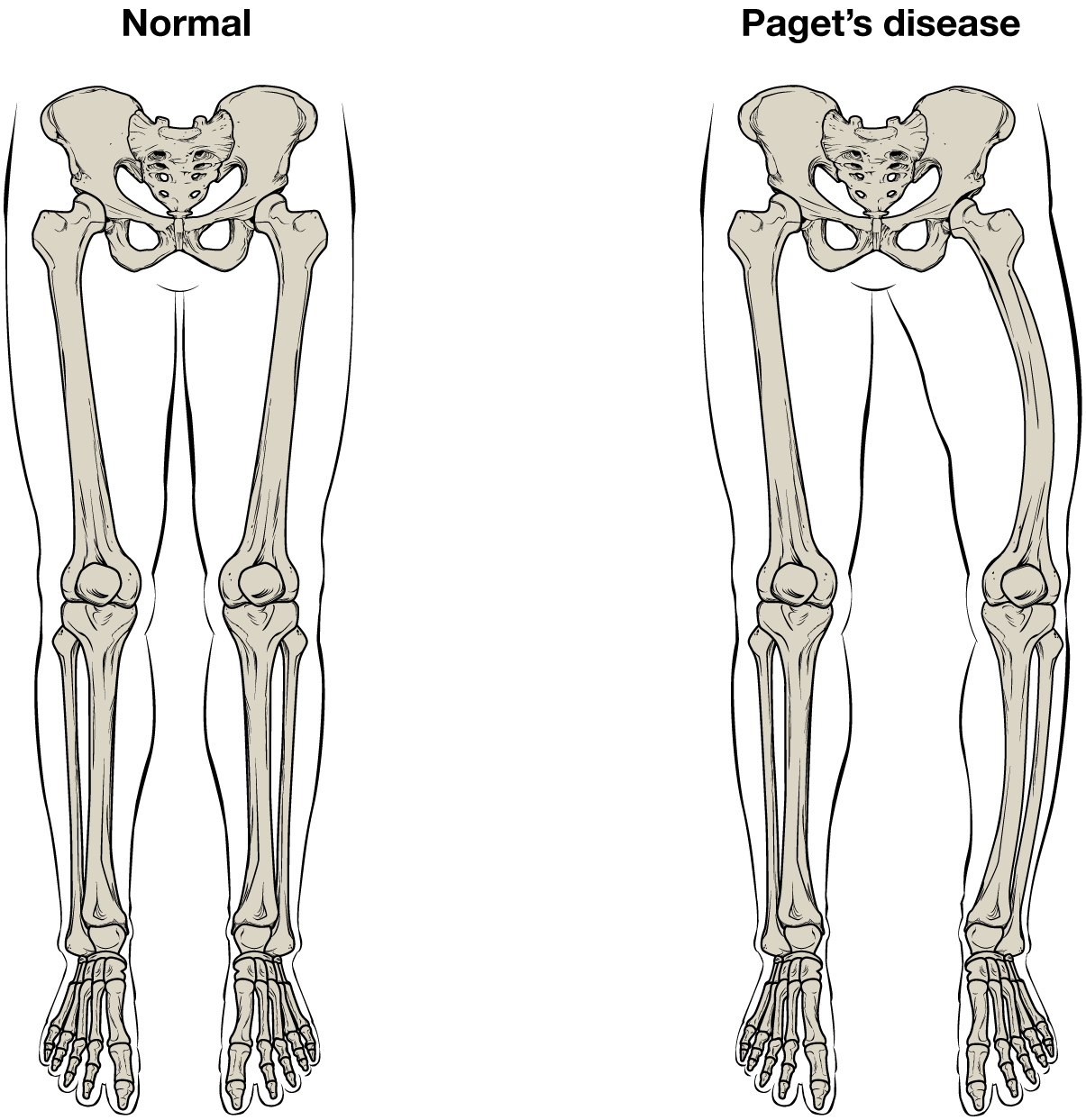 Achondroplasia is the most common hereditary dwarf by bone growth disorders, which can cause the existence of genu varum.

Genu valgum can be caused by genetic, traumatic, idiopathic, and physiological causes and nutrition. In addition, each variation of Paget's disease and asymmetrical limb length discrepancy are among the reasons for genu valgum.

Other Situations That May Cause Limb (Leg) Deformities:

Let's take a look at some cosmetic treatment methods which are temporary solutions before proceeding with permanent correction procedures;

Nowadays, lower leg deformity is an anatomical disorder that is seen as a cosmetic defect next as being a health hazard. Therefore, various aesthetic treatment methods are applied to correct leg deformity. While the methods we are about to mention below are known not to damage bone, muscle, and joints, their permanence is a matter of discussion. 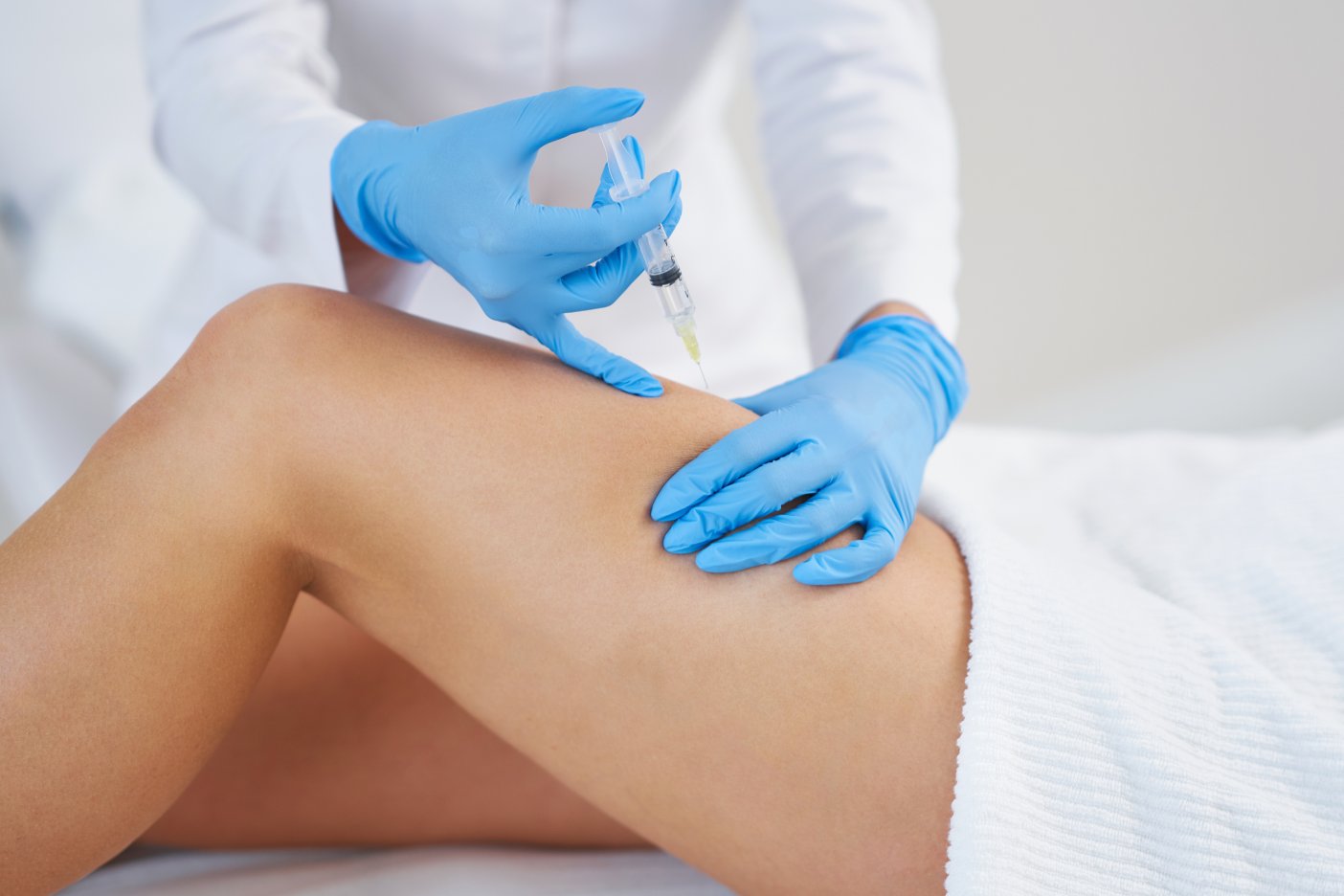 It is done by taking certain amounts of fat from other parts of the body and then injecting them into the area that is disproportioned and that gives the limbs a more natural overall look. The method used for his treatment is vaser liposuction and it is one of the safest methods in liposuction. Repositioning fat in the body provides a natural appearance and healthy results in terms of volume and proportion.  After the operation, the patient can return to their normal life within five to six days. No major complications are related to this treatment the only concern is decreasing in fat amount seen in some cases because of the deformity happening in the lipid's molecular structure, which is a rare and not dangerous occurring situation.

Bowlegs can also be treated using high-end fillings. Patients can return to their normal lives in as little as two to three days, but still, there is a possibility of the patient's body reacting to the materials used in the injection. Thus, it is essential to make sure that they are safe to use to each patient after checking on their allergic reactions. Also, an average of 30% to 40% percent of these fillers used for this treatment are permanent.

Silicone implants are suitable for certain patients, especially with low-fat levels. The difference is that the implants used are more adjustable than the ones used in other aesthetic Treatments such as breast augmentation. The biggest advantage of silicone implants is that their size is patient-based and symmetrical. There are two types of silicon: Flat and flat silicones, and anatomical silicones. Flat and flat implants are preferred mostly for female patients, whereas anatomical implants are preferred for male patients. Patients can return to their normal life activities in an average of three weeks.

Which Surgeries Are Performed To Correct Limb Deformities?

As it turns out that there is no clear data to be processed about the permanence of esthetic treatments. Various surgical techniques are used to correct leg deformities permanently. Experienced doctors choose the most appropriate surgical method based on examination and patient condition;

High tibial osteotomy is one of the bone corrective operation methods. It is a surgical method used to correct the deformation of the lower limb, whether curved outwards ( varus ) or inward ( valgus ). The purpose of this operation is to stop cartilage wear and bring the knee joint to its neutral position by guiding the overloads of weight from a certain side of the knee joints to other healthier parts and provide even pressure on the knee surface and intra articular cartilage. There are two ways to perform the ‘medial opening wedge technique’ and ‘lateral closing wedge technique’. It is a suitable method for patients with restricted knee movement and who have arthritis only on the inner side of the knee. That's one of the methods used for bow legs. The curvature is corrected by moving the linear axis angle to a healthy position. It uses predominantly for varus deformities and is less common for valgus deformities. 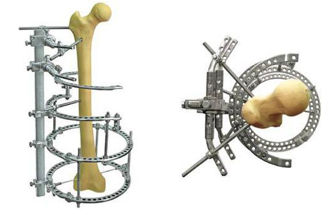 The Ilizarov method is a surgical technique that can be used mainly for leg length differences, leg length extension, and also for limb deformity correction. However, the Ilizarov method is preferred if the patient has both a leg curvature problem and a limb shortness problem as these problems can be corrected with one operation. Thanks to the fixator device not only bone angles are adjusted with the screws to the desired position so that the leg curvature is corrected completely but also the length of the bone is extended.

The Tomofix method has been one of the surgical techniques that are used a lot in leg curvature correction, especially in order to correct limb deformities. In the Tomofix method, the angles are calculated and the bone curvature can be corrected completely. The Tomofix method which ensures the entire recovery of the bones after surgery, allows certain height inequalities between the legs to be corrected during the same procedure. The Tomofix method positively affects the performance of sports activities as it does not cause any undesirable side effects on the patients'  lower limbs where it is usually performed the contrary unlike other cosmetic Treatments like silicon and fat injection methods. More importantly, it is known to prevent calcification, which is likely to occur in knee joints as the patient grows older.

To summarize, general limb deformities and especially lower limb deformities are generally the difference in angle due to defects in the anatomy of the bones. Generally, we are faced with two main types of deformed lower limbs, ‘bowlegs’ ( genu varum ) and ‘knock knees’ (genu valgum), considered the most common limb deformity variants. There are several causes of leg deformities and different treatment methods. Aesthetic treatment methods are low in permanence. High Tibial Osteotomy (HTO), Ilizarov, and recently used Tomofix methods are surgery that solves bone deformities permanently through surgical procedures. Experienced doctors demand X-ray images before deciding the most suitable operation technique. In the case of slight curvature in the bones, both the height extension surgery and the leg deformity correction can be performed with a single operation.

If you would like to obtain more detailed information with regard to limb lengthening surgery, consult a patient consultation expert immediately.